JUHC19: The view from the King’s Fund - InterSystems
Menu
Menu

JUHC19: The view from the King’s Fund 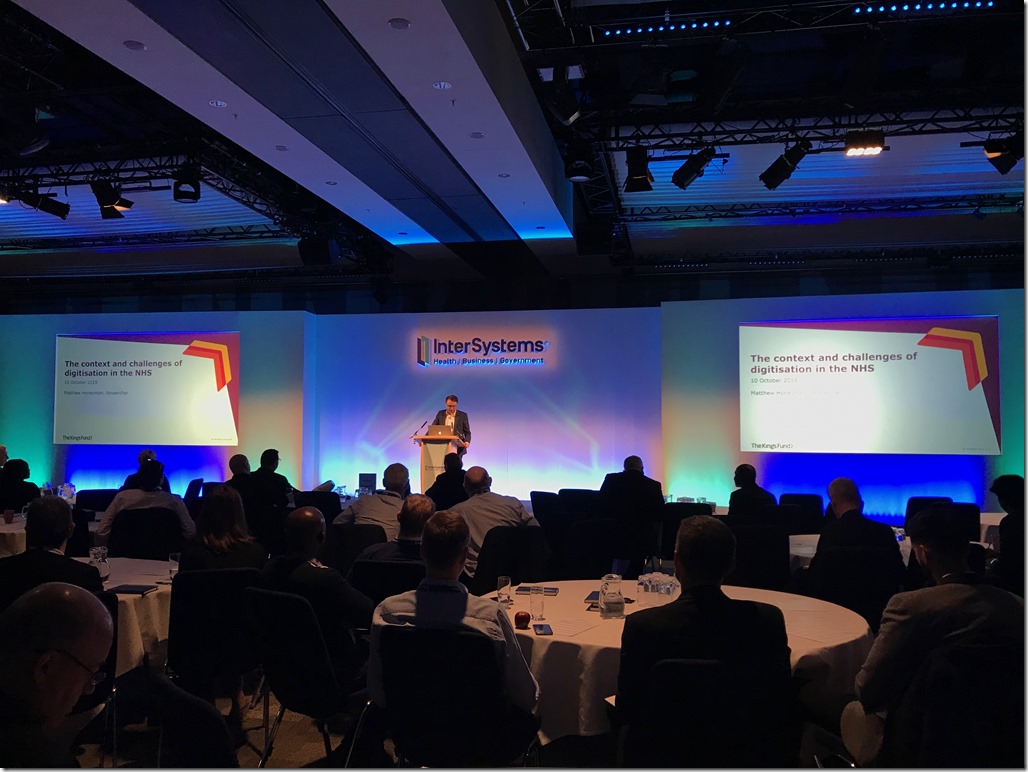 Matt Honeyman, a researcher from the King’s Fund, came to Birmingham to talk to JUHC19 about “the context and challenges of digitisation in the NHS”, drawing on some of the work the independent think-tank has done over the past few years, including its reports ‘Clicks and Mortar’ and ‘Digital Change in Health and Social Care’. Six themes had come out of its work, he said.

One: nothing is set in stone. “There is a theory in society that once technology has been built it will determine the features of the structure that uses it. But if you apply that idea to health you end up with ideas like Babylon Health is going to revolutionise primary care, so you only go into hospital when you need to, or electronic patient records in hospitals will change the way clinicians work. And everybody in this room knows that is not the case.”

Instead, Honeyman argued, the system and the incentives applied to it will affect how technology is used. He also argued that technology needs to address the big issues that the NHS is facing, such as staffing, and demand. However, in doing that, it needs to remember:

Two: complexity abounds: Many studies, including the report on NHS IT by Professor Robert Wachter, have shown that IT tends to automate work before it changes. “So the underlying message here is that this is adaptive: it is not a simple application of something that is going to bring about change.”

Three: data is everything. “I always use this word corollary. We create data on a vast scale, and it can support change (the reports mentioned above discuss pathway redesign and new digital services for patients). However, when working with data, it is important to remember ‘politics’: staff and patients must feel comfortable with the way data is being used, and feel they are getting ‘a fair deal’ when partnerships are struck for research.” Honeyman noted that, both in an out of healthcare this is a coming issue: “It is also being mentioned in the context of the B-word, Brexit, and trade talks: so we need to be mindful about the context of this work and what it does.”

Four: work and the workforce: “There is lots of evidence that work and working will be improved by the introduction of technology. Eric Topol, the doctor who came over to talk about technology and the workforce, talked about ‘the gift of time’ that it can deliver. But there are some downsides, and we have to make sure that staff are empowered when they going through this kind of change.”

Five: engagement of staff, citizens, communities, users: “Everybody we spoke to said this was critical. When you are making change, you need to engage with users and communities, and you need to make it early and continuous. Also make sure that you reach out to people who may be less co-operative with you. We spoke to one nurse who found the one consultant that was stopping her project and she went out of her way to find and meet him and win him round.”

Six: William Gibson was right: “The future is already here it is just unevenly distributed.” However, Honeyman pointed out that there are variations of this quote: some peope add ‘yet’ and some say it is ‘just in testing’.’ “Which you like indicates whether you are a pessimist or optimist or software developer. But what we need to do is keep going.”

“Digitisation is complex” @matt_h from @TheKingsFund discusses how to address the lessons of its work for health policy makers who want to drive large scale digitisation of the #NHS pic.twitter.com/gdhRnpTTqm

Honeyman pointed out that the NHS has tried many different approaches to NHS IT over the years, but health and social care secretary Matt Hancock and his new advisors and organisations, such as NHSX, are taking new approaches. He argued that they have a number of options.

The first, and perhaps most obvious, is ‘build it’: but, Honeyman argued: “This is the option they seem to want to use least. The NHS App is really instructive here: Hancock quickly identified that building increasing features into the platform is not what he wants to be doing, and instead others will be encouraged to work with it on a partnership model.” The second is to ‘lay down law’, but that is not happening. And the third is to ‘use networks’.

“I think this will be the most used and productive option,” Honeyman concluded. “Bring people together, so users and suppliers together can support engagement and improve user experience.”