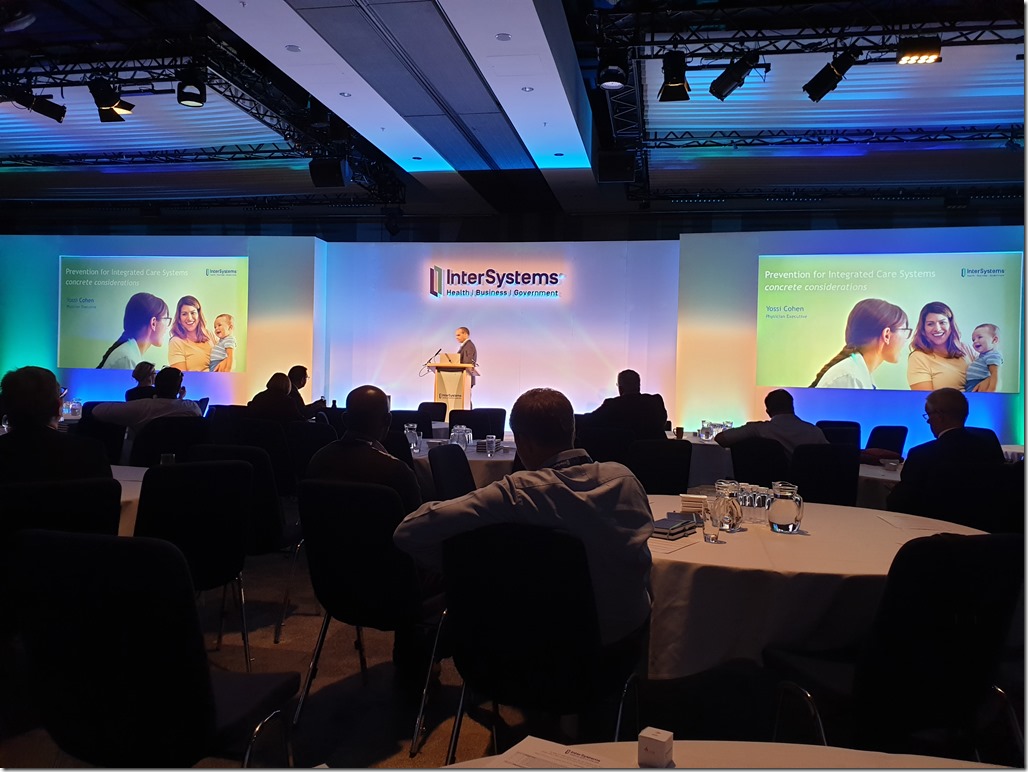 Yossi Cohen, physician executive, InterSystems, opened the afternoon session at Joined-Up Health & Care 2020 by talking about prevention, why it is an NHS priority, and how technology can help.

He opened by pointing out that in one of his first speeches, Matt Hancock stated that his priorities as health and social care secretary were going to tech, staff and prevention. And he has followed up on that with a stream of documents.

The Department of Health and Social Care has issued ‘Prevention Rather than Cure’, while the ‘NHS Long Term Plan’, makes prevention is a key component, to be delivered through integrated care systems that bring health and social care services together. There has also been a green paper. All of which, Cohen said, raises the question: “Why all this talk about prevention.” And: “Why now?”

The NHS is fighting demand with efficiency: and demand is winning

Well, he said, one reason is that “A&E admissions are going up. If you look at the maths of it, there is an increase of about 3% a year of people being admitted, and if you take out population growth you get underlying growth of 2%.”

This, he said, “throws the system into chaos. It costs CCGs a lot of money. It takes up beds so operations are cancelled: waiting list targets are also going up and up. It causes a lot of harm: for elderly people, a hospital admission can be a life-changing event. And the NHS staff just can’t keep up and nobody wants to do the job.”

Fortunately, there is good news: “If you look at the figures again, the number of bed days has not gone up that much. And that is because length of stay has come down. The NHS has become much more efficient. Hats off to the NHS. How did it do it? It took out zero day admissions, for the highest admission groups, the elderly and people with co-morbidities.”

Unfortunately, “the number of days is still going up.” The efficiency route, Cohen argued, is out of room. And yet, demand could increase by another 25% rise over the next ten years.

Cohen said he was giving his audience a new job: to run an integrated care system. And he offered them various tools. Many of those public health documents, he pointed out, put a lot of faith in the tool of reducing inequalities. However, he noted, successive governments have tried this “and they are just not very good at it.” Inequalities can be intractable.

The other big idea in the documents is to make better use of data. He put up screen a diagram of the Kaiser Pyramid, which captures the idea that populations can be risk stratified, so that different health interventions can be directed towards them. However, he noted, that delivering the interventions is not easy. Even when they are put in place, people may not follow them. For example, clinicians may not prescribe as directed.

So, he said, as head of the ICS, how is the audience going to do this? Well, he suggested, that what they need is ‘The Cookbook for Integrated Care’, with lots of great recipes for combining data and interventions into simple and effective ICS programmes. Unfortunately, it does not exist. “So what I want to do is give you some help. Because without this book you cannot do this job properly.”

The Cookbook for Integrated Care

The NHS, he acknowledged, has been trying to create a cookbook, through the Right Care programme. However, Right Care covers only a few pathways, and their recipes are variable. “They may tell you to use butter, but not how much.” There is also NICE guidance, although a lot of this only covers treatment, rather than prevention.

So, the audience will need to write its own book. A good place to start, Cohen suggested, is “to ask the clinicians in your region” for recipes; although there are a few challenges with that. For a start, clinicians are not very engaged with ICSs; many will not even know what an ICSs is and only a minority will support one when you tell them.

“GPs in particular worry that they are just going to get a lot of hospital work and not get paid for it.” Also, clinicians are not really process people. Therefore “you have to win hearts and minds.” This is all about “making people play ball with you.”

Other places to start are to look at existing recipes, and see if they are good ones and being followed, or to try creating wholly new recipes. Cohen suggested there are challenges with the latter: cooking up a whole new ICS process “will require very good data science skills” and significant resource.

But checking whether an existing recipe is being followed is more manageable: it’s possible to look at pathways and see where there is inefficiency and waste: and to establish why it is occurring.  In fact, he suggested “am I following my own recipe?” is the sweet spot that the audience should be aiming for. “It does not sound exciting or sexy” but it is relatively easy to do, and relatively easy to evaluate the results.

“As long as you know what it is you want to achieve.”