It was the fourth session of the InterSystems Joined-up Health & Care event in Birmingham and it was time to warm things up. It was time to talk about FHIR. Fast Healthcare Interoperability Resources. The standards that are being developed by the HL7 Organisation to drive healthcare IT system interoperability. 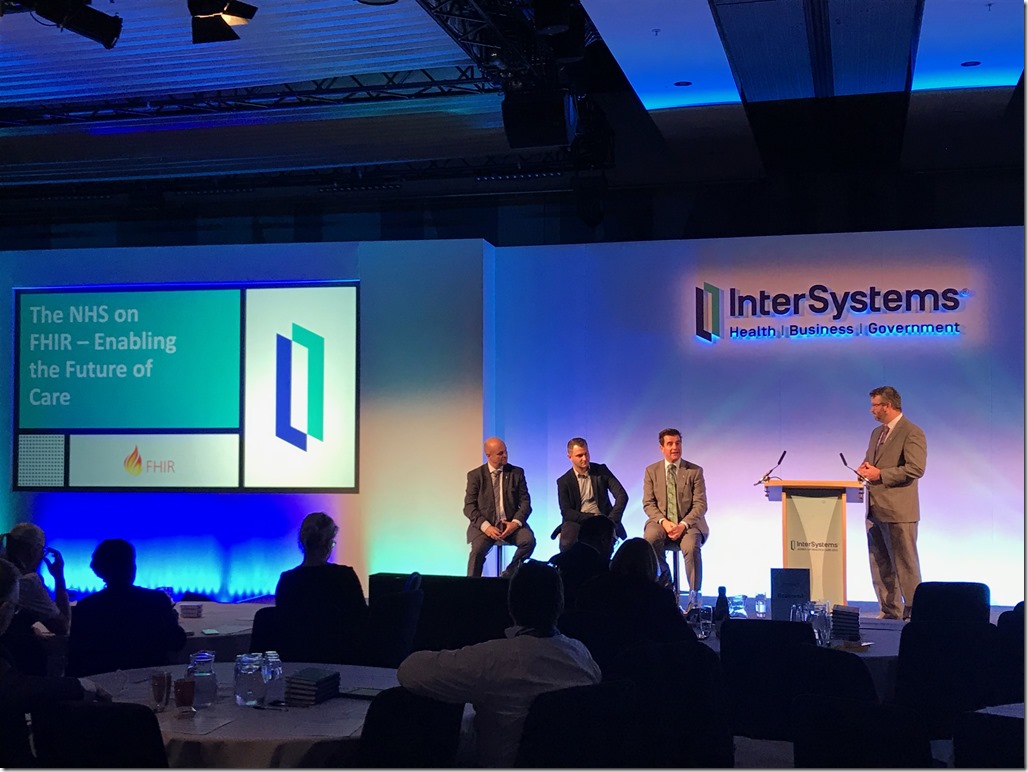 Starting with the basics

Tom opened with an easy starter for ten: what is FHIR?

David: “It is the new standard from HL7 that takes the best of previous standards and tries to build on them. It separates information from its presentation and makes it possible to do lots of things with it. It also supports something called REST APIs, which will enable us to bring healthcare into the internet age. It will also enable us to bring more developer talent into healthcare, because all the young data scientists out there are familiar with REST.”

Tom: But why is it important to the NHS? Ian: “As David said, getting information out of NHS  systems is hard, but FHIR makes it much easier.” Tom: And what are the priorities for its lead out? Ian: “All new messaging from now on should be FHIR. So we are seeing some of the GP data move to FHIR, and things like the national event management service are using FHIR. The local health and care record exemplars are wanting to convert systems to FHIR. And we are starting to see local organisations wanting to pick this up and run with it.”

Steve: “A good example is the event management system that we are building, which takes the messages that are generated about young children up to the age of five, and puts them into an electronic version of the Redbook that all parents will be familiar with because they have to carry it around. They can get information from GP Connect and see patient information from the GP in the ambulance on a tablet. That is going live this week. We are also looking at taking GP Connect data and sending that into East Midlands Ambulance Service ambulances, so the crew can see GP data as they are on their way into hospital and help to inform treatment decisions. That is going live this week.”

Playing into the national agenda

There is a big picture on FHIR, though. As David pointed out: “This plays to the national agenda that Matthew Gould [the chief executive of NHSX] has spoken about, which is moving away from applications, and moving towards platforms and services and APIs. That’s because we need to be able to unlock data and let it flow securely around the system and it is only using FHIR we can do that. That is why it is fundamental.”

Tom: How do we bring the industry together on this? Ian: “There is a website, and a library, and a big network, but one of the big things we want to develop is a library of specs for projects. So we have the specifications, but if you think about something like the ambulance project that we have talked about, people might wonder where to start with that, so we want to put together some material so they don’t have to do it all from scratch.”

David: “Other things that we are thinking about at INTEROPen is implementation guides. Because it is fine saying there are profiles and resources, but it is not always easy to use them. So we want to make sure developers understand how they should be used. We recognise that is something for us to work on and to take through a process of continuous refinement.”

Lots more support is being built by @NHSX – watch this space! #JUHC19 pic.twitter.com/PkVvqGY1p3

Techy: but supported by InterSystems, and free to NHS customers

The debate then took on a more technical bent, focusing in on how suppliers and the industry are going to move from the latest iteration of the FHIR standards, STU 3, and adopt the latest version, known as R4.

Tom asked his panel whether the NHS’ current standardisation on STU 3 was “going to be a problem as R4 comes along? Ian: “I think there will be some cross over and both will be around for sometime. But there will have to be a cut off, so there is a point at which all developments are in R4. All the Care Connect work we have done so far [with NHS Digital, to allow data to flow between healthcare organisations in specific circumstances] is STU 3, and there will be a need for R4. However, we have one of the LHRCREs working on that, so in the library there will be an R4 version. Fortunately, we are not expecting a version 5 anytime soon.

David: “From a supplier perspective there is enthusiasm for R4, because people don’t want to be reworking things all the time. Because R4 is normative. Anything done in it will be backwards compatible. It is just a case of working out how to do that uplift.”

Tom: How will InterSystems cope with some things being in STU3 and R4? Steve: “We managed to move to STU 3, and that was hard. But R4 and R5, we will work with them as we go. David: “We will support people on different versions, and we have committed that we will make all of the NHS FHIR standards into our software and make them available free to our NHS customers. So that is really important for the service to get the value from and drive the adoption of these standards. Because we all want, the service, suppliers, taxpayers, adopted to get the value.”

Also, he added, international suppliers are keen to work with the new version, because it is being used not just in the UK but globally. Steve: “This is the first, universal standard for healthcare. It is the only game in town.” Tom agreed in conclusion: “This is going to change our industry. Let’s go and take the FHIR out there.”