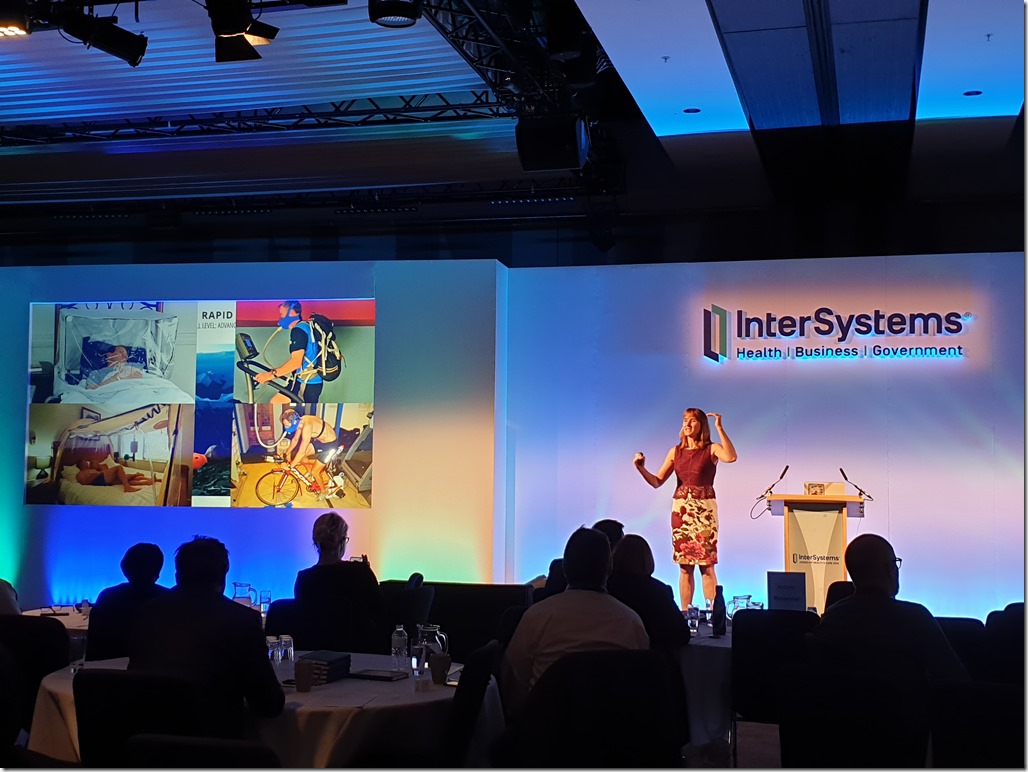 Cathy O’Dowd is a South African rock climber, mountaineer, author and motivational speaker. She was the first woman to reach the summit of Mount Everest from both south and north sides. And, she told Joined-Up Health & Care 2019, that is a problem.

“As soon as you have done one challenge you move on to another. People talk about something as being like climbing Everest and they talk about the next Everest and I have done it twice,” she said. “But that was a long time ago. And now Everest has become something slightly different.”

So many people have now climbed Everest, she suggested to the audience, that there is a question to answer: “Is it still the greatest challenge?” A telephone vote by the delegates gathered in Birmingham showed some scepticism.

“So let’s see what that might be,” O’Dowd said. “Here is a picture of me on my second climb, and here is the same ridge the year more than 800 people made it to the summit. And that is because they have put in fixed lines and all you need to do is clip in for your five minute summit selfie.”

Indeed, she suggested, Everest has become a commodity. There is a luxury package: $130,000 with fresh veg helicoptered to the basecamp. Or there is a rapid assent option for busy US executives: $85,000, with an acclimatisation tent in your bedroom or office until you are ready to go.

“Everest is the new yellow Lamborghini for your mid-life crisis,” O’Dowd said. “But we are all stuck with this. That thing we did five years ago that was trend setting, now everybody is doing it. So we need to get out of the queue and go back to what made Everest significant in the beginning: which is that a small number of individuals set out to do something that had not been done before.”

So, she said, what does this look like as mountaineer? It means finding new routes: routes like the Mazeno Ridge in Pakistan, with its high death rate, and eight peaks, some of which had never been scaled. In a vote, the audience indicated it did not fancy trying this.

And O’Dowd said she saw the point. So the question is: “How do you acknowledge the danger, and still make this a viable attempt?” Well, she said, information is going to be key: and there is some information from previous attempts, one of which only failed because it ran out of supplies. “That makes it sound like the answer is to take a bigger team, but nobody does this any more,” she said. “We go light and fast, it’s called Alpine style.”

So, the first challenge for the expedition to the ridge is to find the right team. “We put one together, and we bring in three Sherpa climbers,” she said. “They are adapted to high altitude. They have never been to Pakistan. So they are there as climbers.” Asked who they would stick with up the mountain, the audience voted for the Sherpas. “Well, I’m astonished so many of you stuck with the Europeans: it is clearly them.”

The next challenge is to plan out the project and to resource it, and there is a trade off between speed and weight. Some weight is essential. Gas cylinders are used to melt water and make food. How many do you carry? The audience voted for a few. “Clearly people like a meal,” O’Dowd joked. But, she pointed out, the vote displayed a bias: “We all know what it is like to be hungry. But it’s hard to imagine being too slow.”

Eventually, the expedition sets off. “And immediately things go wrong. We run into deep snow. Mist comes in every afternoon: which doesn’t matter on a fixed line on Everest but matters a lot when you are working out where to go. Then there’s all the work that has to be done when you stop: putting up tents, melting snow, eating this rehydrated food, drying clothes, trying to sleep. All of this means that we are slow.”

And then things go really wrong. A Sherpa falls, and there is another decision: go down or wait for him to come up. The audience votes to go down, which O’Dowd points out displays another bias: towards action. However, the team does go down, and spends a night exposed.

Then storm warning is received. Do they stop or go on? They stop, and lose more time because the storm does not arrive. Then they come across saw-toothed ridge, which is hard to climb. At the top, do they take a day off or keep going. This time correctly, the audience votes to keep going.

Finally, there is a gorgeous sunrise. “Beautiful, one of those rare days that only happens in the high mountains.” But… “it’s the wrong summit.” The expedition should have been going sideways, and now it’s hard, so they end up going back. “Eighteen hours of our lives wasted.”

This brought O’Dowd to one of her main points. “Why did this team, with so much experience and so much planning get here?” And, she said: “I think we made several errors. One is that we failed to integrate the team. The Sherpas are incredibly strong, but they are used to being in a queue on Everest. They are not used to making strategic decisions.

“The European climbers are there to do it. But we are too tired. So what we need is rapid communication between both parts of the team. Otherwise, you get siloed by funny structural choices. We are separated by ropes. I’m wearing four layers of clothing over my ears. We camp in two man tents. There is no space for us to have a considered, thoughtful discussion about the long-term direction of the project.

“Instead, we stick to the plan, keep on trying to execute it. Which works on Everest, where you know every metre. But it does not work in the unknown. So we needed to be more flexible about how the plan works.”

Success, and learning from it

From this point, even bigger decisions had to be made. On day 12, she said: “We have a few energy bars and boiled sweets and two days to get down.” So, decision: does the whole team go down, the whole team go up, or does the team split, so some can make it and some can return safely. The audience votes for a split, and that’s what happened.

O’Dowd goes down “because I have a slightly different goal, which is to get down, and plan the next one.”  The summit team took another two days; but got up, and down, and “won golden ice axe”; although they lost a lot of toes.

In conclusion, O’Dowd said: “There was success, but we could have done better, and I regret the mistakes I made early on. Because we lost three days to wrong choices, and with those days we could have got everybody to the top. Also,we  stuck too rigidly to the plan. We had spent a lot of time on it, and we should have said ‘not working, let it go.’ However, she pointed out, “we got there, and we got it done.” The trick is just, next time, to do better…